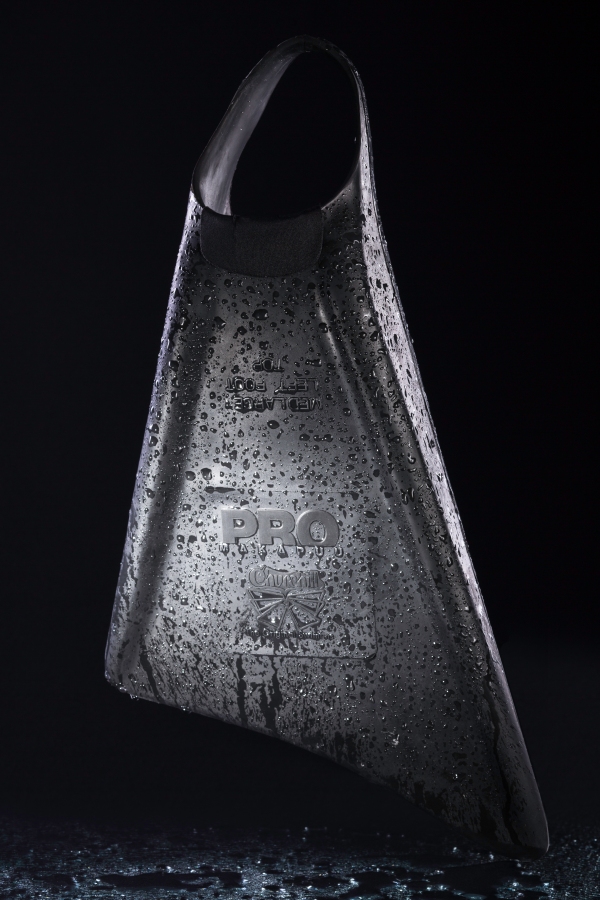 Today I shot a single Churchill Makapu’u Pro Swimfin. Churchill is “The Original Swimfin” according to the company. Lots of pro bodyboarders, bodysurfers, and swimmers use these fins. They boast a comfortable foot pocket and are powerful. The fin is mostly known for its dolphin tail shape.

This was fairly difficult to light. The fin is made of matte black rubber and there is a logo and embossed block lettering. I wanted to be sure to show that since it’s an important part of the company’s marketing. Here is a time-lapse I took while I setup the lighting.

That definitely isn’t how the lighting ended up. I added two Speedlites with grids. I kept the two side lights and dialed in their intensity and then moved the gridded beauty dish around a few times to get that right. I also ditched the top light. I think it would have been ok with a 10 degree grid and just a touch of strobe, but I was still able to cover the top edge of the fin with the second Speedlite.

The logo is lit using one of the Speedlites with the Rouge Grid setup. It looked okay without the water. But it was pretty plain and the nature of the rubber left lots of blemishes and uneven gradients. I think adding the water was both a good move to make the image more interesting, and saved me a ton of retouching.

As you can see in the time-lapse, the fin is suspended using fishing line. I originally had it just touching the glass, but later raised it 1/2 inch. I tried a few variations of spraying water during capture, just before capture, and waiting for drips to happen during capture. The water droplets definitely weren’t large enough to look cool, and I didn’t have a hard backlight to catch them if they were, anyway.

About 3/4 through the main Speedlite stopped firing. I had to move what was the top light over near the optical slave sensor to actuate it again. In all, this shot took 5 lights (not including the top light to actuate the Speedlite). Once I nailed the logo light, adjustments came pretty easy and I was done with the final capture. Over all, I completed this image in about 4 hours including set assembly and disassembly and editing.